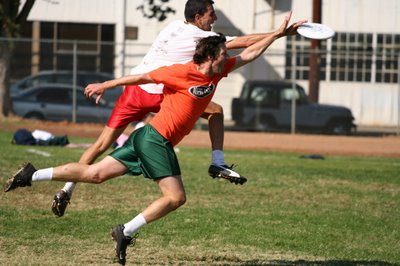 That, my friends, is not a picture of Pete’s great catch. A catch like that from Pete is not unusual enough to post a picture. No, that is a picture of Ryan’s all-out bid. A bid, in Ultimate, is any hard try – any attempt that you put your heart into. Ultimate is all about the bid.

It makes sense that Ultimate players love the bid; a disc in flight is far more erratic than a ball, so a crazy-ass attempt can make an impossible catch or D and a crazy-ass attempt can miss through no fault of the player. You cheer for the bid like you would cheer for the play. You hear it all the time on the sidelines, “nice bid”, “sick bid”, “bid for that!”. Besides, no matter who came up with the disc, both players ran like demons and tried so hard and we all know what that feels like.

In Ultimate, one of the few things that can get you yelled at is not bidding. If you were on D and didn’t take a swipe at a passing disc, or contest for a throw to the girl you’re covering, a senior player might gently take you aside later. “Did you see that you had a bid on that disc? A fast girl like you could have gotten it… .”

When you have played Ultimate for a while, you bring the philosophy of the bid into your whole life. Everything you decide to do deserves your best try, because the bid itself is so important. Success might be nine parts the bid and one part chance, but the bid is the part you can be proud of. And if you held nothing back, failing is almost secondary. It doesn’t feel as good, but you can still have your team in your heart, reaching to slap hands, murmuring “nice bid”, “sweet run”, “I saw you trying”, “nice bid, hon”, “good bid”.

And you don't know if you could have done something unless you give it your all!

Maybe that's what scares some people, that if they do give it their all and they're still not good enough...

I'm so glad you put up a picture; I always thought Ultimate was a board game!

Running ultras requires a bit of that same bid mentality. Man, you make me wish I played more disc... but as long as I'm running this kind of mileage, I think two hours every Monday will have to suffice.

My personal fitness motto is "Whenever I feel like exercising I lie down until the feeling goes away." I guess the equivalent motivational motoo would be: Always shoot for the moon.

For me cricket is more interesting: you have to learn to let things go, to know when to play ("bid"), when not to; and sometimes "succeeding" isn't everything, "saving" the game is as important. Aggression:yes, but like a master only when the time is right...otherwise, some of the best play is when one goes unnoticed.

Dude, there's a (very sweet) kid who plays with us who lays out for last back! Every few games I'll hear the sidelines bust up laughing and his plaintive cry "it was close!" I adore him.